Fusica was established by Mark van Tongeren in 1998 as an umbrella for his activities as a free-lance artist, writer, musician, publisher. Since his youth, he was fascinated by the interplay of arts and sciences, or the humanities and physics. When seeking a name that could reflect his desire to keep these two seeming opposites in balance, he chose to combine three words:

• the Latin word for music (musica and its Greek counterpart μουσική (mousikè, referring pimarily to poetry and the art of singing. They represent arts, humanities and a qualititive outlook.
• the Greek word for physics (φυσική/fusikè) and its Latin equivalent fusica, representing science, math and a quantitive outlook).
• fusion

Fusica stands for the meeting of physics and music, and of science and art. In a more general way Fusica denotes the fusion that arises from seeming opposites such as body and mind, or yin and yang. The activities of Fusica are grounded in an interest of studying and exploring the co-existence of these contrasting forces. 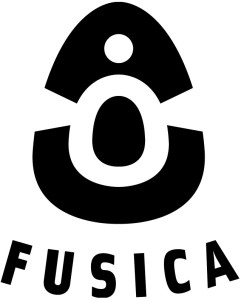 The Fusica logo was created by Mark who is often asked about its meaning.

Every answer is basically correct, since it symbolises “the secret of the universe”, encompassing all there is. Feel free to leave your comment on the logo below!

Some of the guesses:

It is a plectrum to play a guitar

It seems like you are looking into a throat. Or actually it is a double PacMan.

It has to do with the vowel triangle.

It is an ANGEL

It is someone waving his arms very fast.

All photographs by Mark van Tongeren unless otherwise mentioned. For public use, please refer to the photographers, including Jochem Hartz, Yi-Jin Hsieh, Nienke Berghuis, Basten Stokhuyzen.

Texts, images and mp3s that are part of published CDs, DVDs, books or articles, and some photographs are copyright protected by the respective publishers/owners of the work. Other works are published under a Creative Commons CC BY-SA 4.0 share alike 4.0 license.

Using (portions) of the texts, images and sounds for non-commercial purposes is encouraged, with reference to the rightful owners of the materials and a link to the webpage.