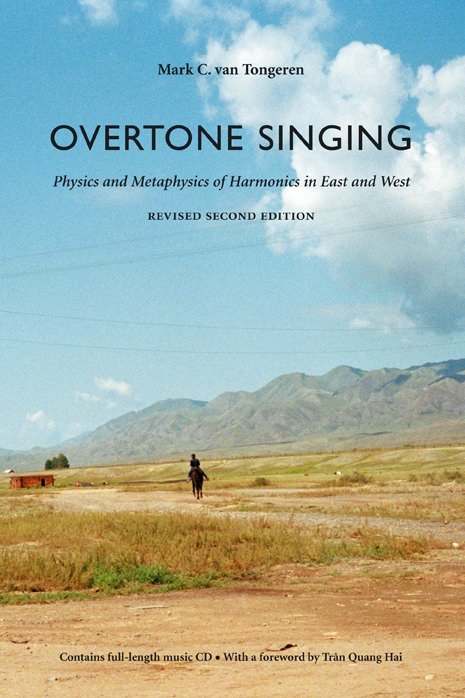 Overtone Singing – Mark van Tongeren – All About The Book

In his book Overtone Singing, ethnomusicologist and singer Mark van Tongeren provides a fascinating insight into the timeless and universal aspects of sound and vibration. It is grounded in decades-long studies of music, and draws upon fieldwork experiences, interviews with eastern and western musicians and the work of numerous scholars. The book presents a multidisciplinary vision on sound that runs from World and contemporary music to the science of acoustics and perception, to music philosophy and the spiritual dimensions of music. Written in a non-technical style, this book and accompanying audio CD is an indispensable guide to musicians and music lovers seeking a deeper understanding of the nature of sound.

For the second edition many small improvements have been made. The last part of the book, Quintessence: The Great Realm, has been thoroughly rearranged and expanded and is now much more ‘quintessential’ than it was in the first edition. The bibliography contained only books quoted in the text, and now contains other relevant titles as well. CDs are now listed in a separate discography at the end of the book, and the index has been expanded.

The book’s forward was written by musician, composer, doctor in ethnomusicology, advisor and friend Trân Quang Hai, who worked for forty years at the National Center for Scientific Research (CNRS) in Paris, France. You can read it here. 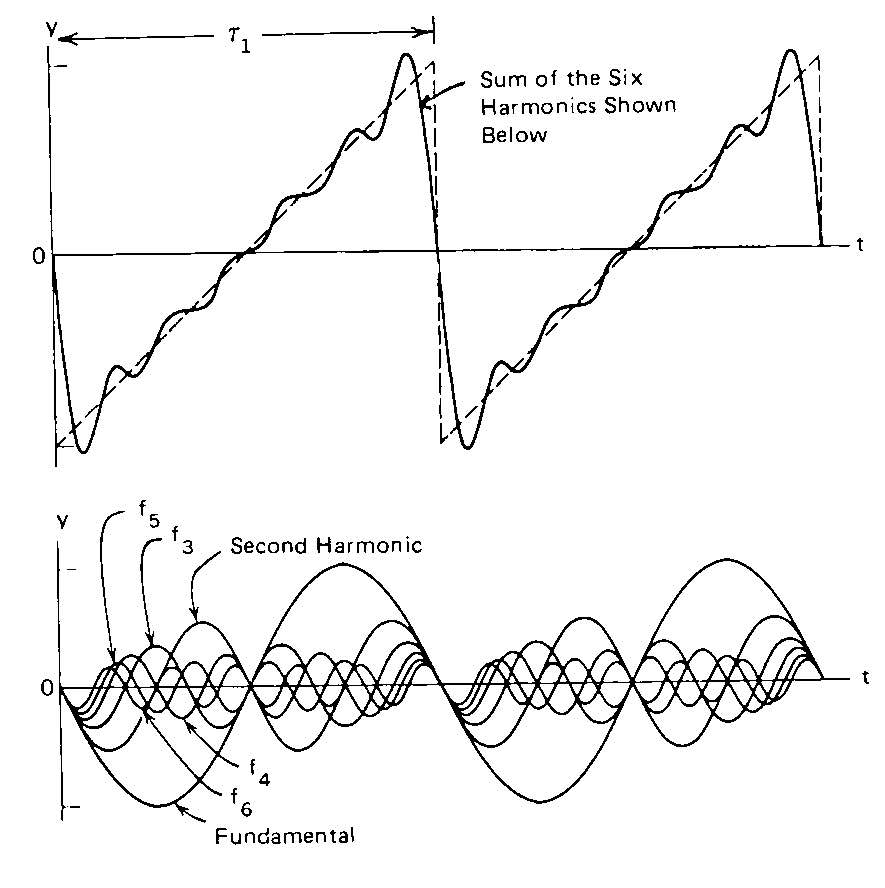 Physics deals with the acoustic, physiological and psychological aspects of sound, the harmonic series, the (singing) voice, and their importance in overtone singing. It is divided in two parts: singing harmonics and listening to harmonics.

East discusses traditional practices of overtone singing. First of all of throat singing in Tuva, South Siberia, which is where most of the fieldwork for this book was done. From here the music of various neighbouring peoples and cultures is discussed, such as Mongol throat singing and Tibetan chant. In all cases singing attention is given to many other aspects of these societies like, for example, animism and Buddhism. 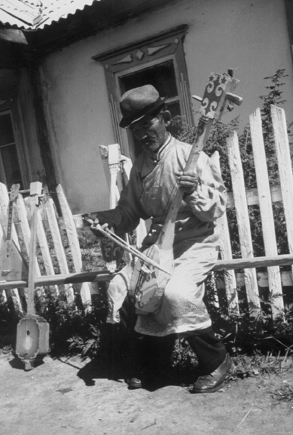 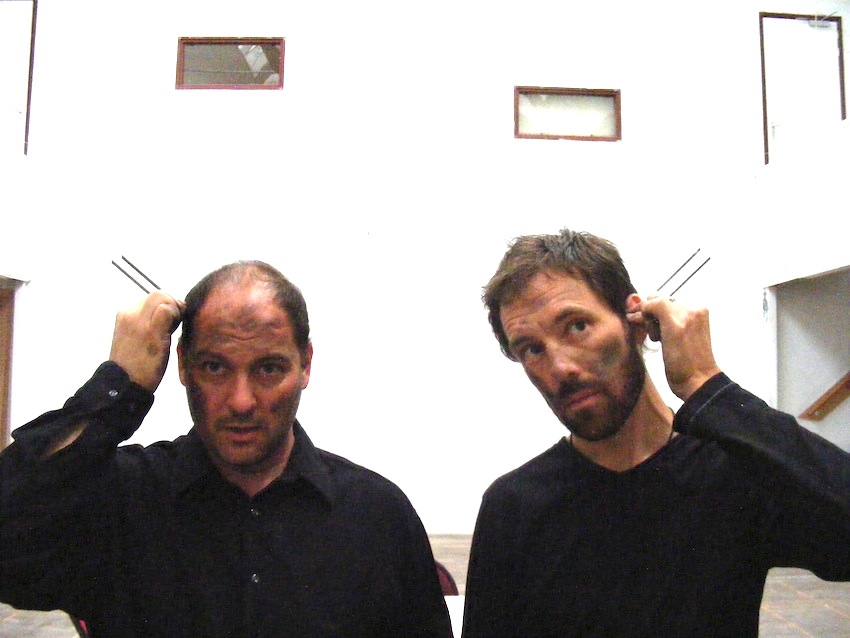 The third part, West, sketches the history of overtone singing in the west, from the first steps made by composers and improvisers to the cross-cultural fusions of today. In the western world overtone singing is a relatively new phenomenon. Aesthetics, questions of beauty in the music itself, and musical invention are emphasised here, rather than the social or spiritual elements.
Metaphysics – Body, Mind and Beyond delves deeper into the philosophies and belief systems underlying harmonics, harmony and numerical ratios. Meditation, therapy, effects on body and mind, resonance and correspondances between wave lengths on various scales are some of the key words here. These issues take us back to the times of Plato and Pythagoras, and end up with new questions about the consciousness inspired by Eastern philosophy. 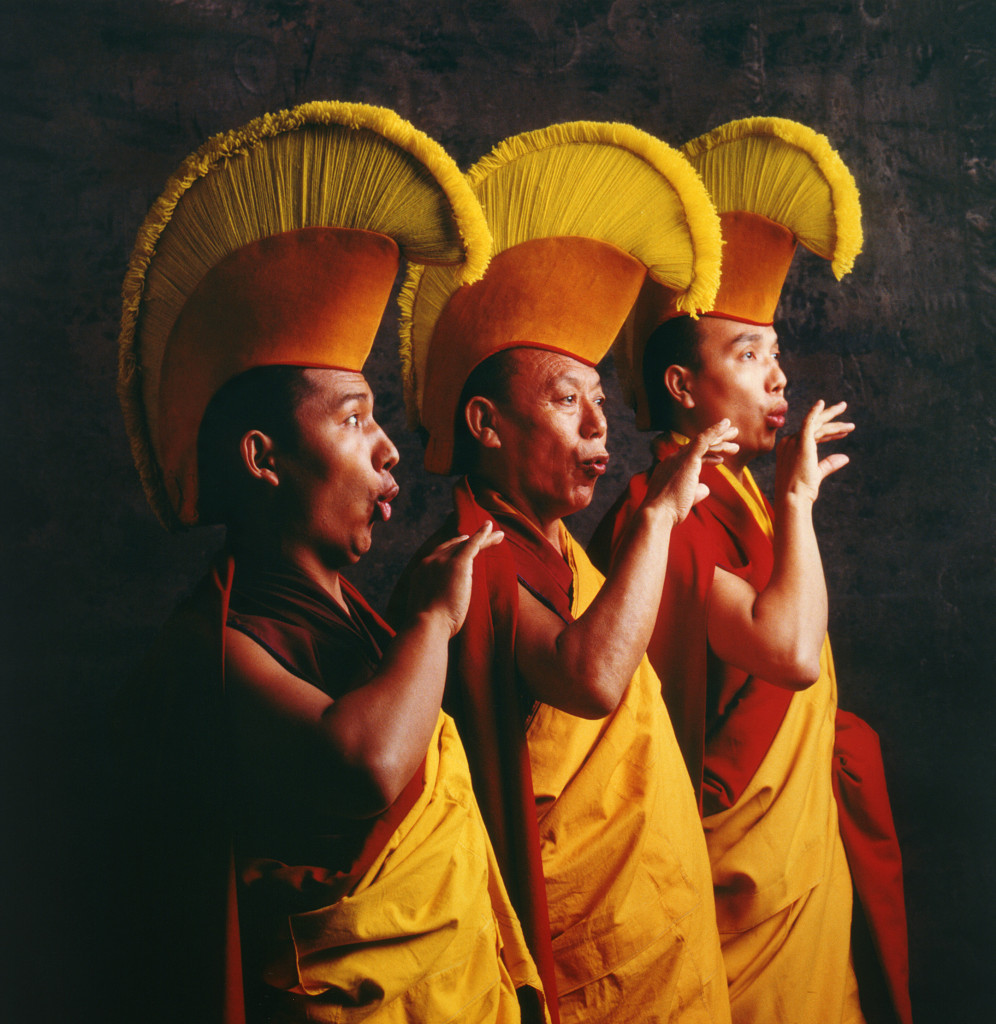 The fifth and final part is called Quintessence – The Great Realm. It draws some parallels and conclusions based on the ideas assembled in the first four parts. It is also a more personal interpretation based on the research of the author as a singer and musicologist. 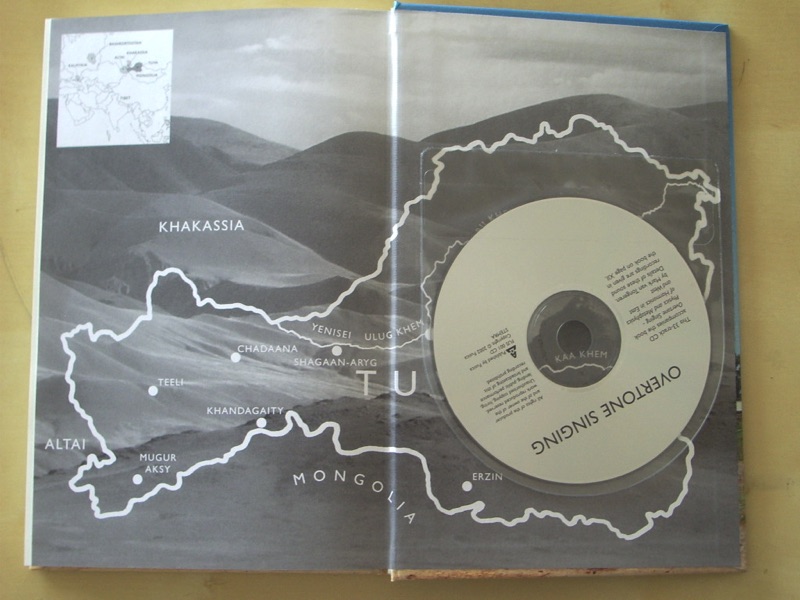 CONTENTS OF THE BOOK

Three children and a bull 54 Throat singing in everyday life 56 Two Outstanding musicians-composers 58 Styles and techniques 63
A teacher and expert 66 Education: now and then 69 At the periphery of music 72 The world of spirits and sound 73 A whole gamut of wheezes 77 Throat singing in ritual contexts 79 In previous centuries 82 Live at the Bolshoi 85 Khunashtaar-ool: khoomei redefined 87 Cultural authorities and musical hierarchies 88 From Vladivostok to Havana 90 Tuvan city blues 96 The Tuva Ensemble 100 Tuva in turmoil 103 A musicallineage continued 105 Huun-Huur- Tu: Back to the roots 107 Killing him softly: women and khoomei 110 Tradition in motion 112 A concert by full moon 113

Mongolia 119 Epic singing 126 The Altai republic and the revival of epics 129 Echoes from the past 130 Going to Kyzyl 132 Song for the river Katun 134 Khakassia: the spirits return 136 Receiving a gift from the spirits 139 Kalmykia: epics and ideology 140 Bashkortostan: an independent case 143 Tibet: sound and symbol 145 An eye-witness account 147 Sutras, mudras and mantras 148 A tool for the mind: the harmonic as symbol 152 A different reality 153 Sardinia: the virtual voice 154 South Africa: the human voice as a type of musical bow 157 Idiosyncrasies 159

PART THREE: WEST
CHAPTER 5 -A HlSTORY OF OVERTONE SINGING IN THE WEST 165

The Tortoise, his dreams and journeys 166 Tuning up to the cosmos: Stockhausen’s Stimmung 167 Trial and error: A Vietnamese in Paris 170 The 1970s: extending vocal technique l72 Michael Vetter: Zen and sound 176 David Hykes: solar winds & rainbow voices 179 The snowball effect 184 Globalisation and cross-fertilisation 186 Noah: Harmonics at the opera (Part Two) 188 Out of Tuva 191 Rollin Rachele: Harmonic divergence 193 Toby Twining: requiem for a millennium 194 Return to the source: plainchant 197 The stepchild of European music 198

EAST VERSUS WEST
The universal harmonic 237 The non-universal harmonic 238 The spiritual dimension 239
PHYSICS VERSUS METAPHYSICS
Some thoughts about nature 243 Music and ideas about nature 245 Renewing the ancient marriage between music and physics 246
THE QUINTESSENCE OF SCIENCE, SOUND AND SELF
Paradigm change 248 A paradox for the senses 250 The fifth element 252 The Great Realm 253 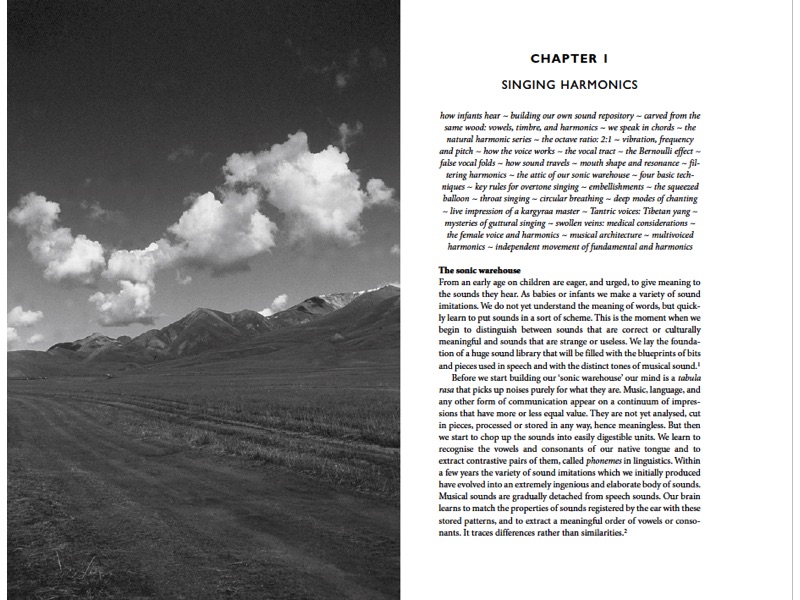 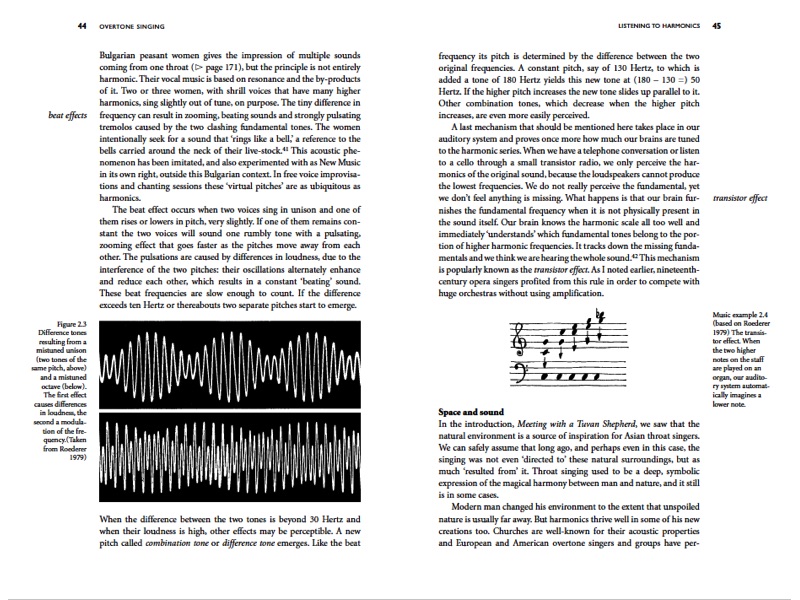 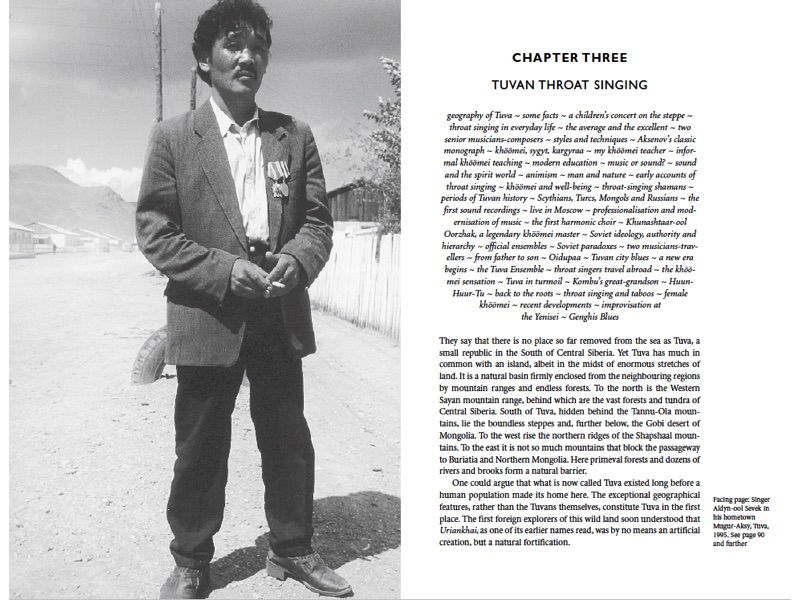 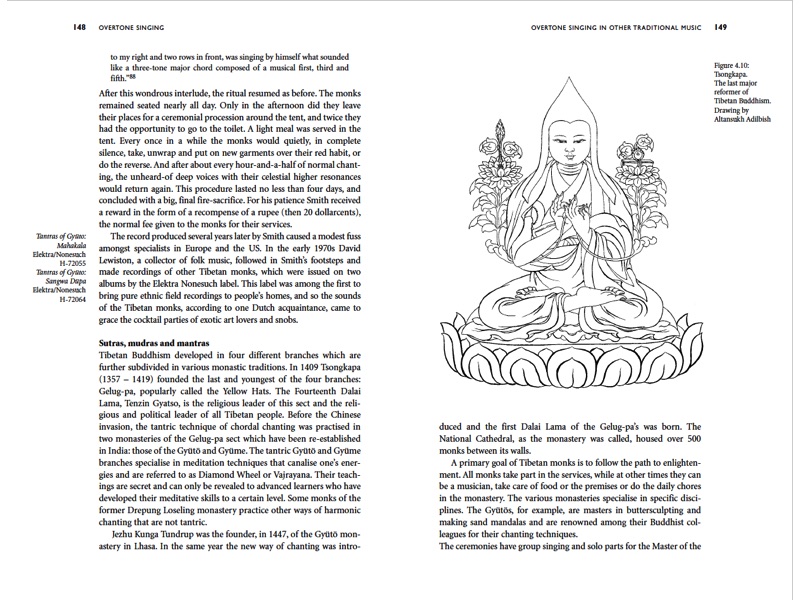 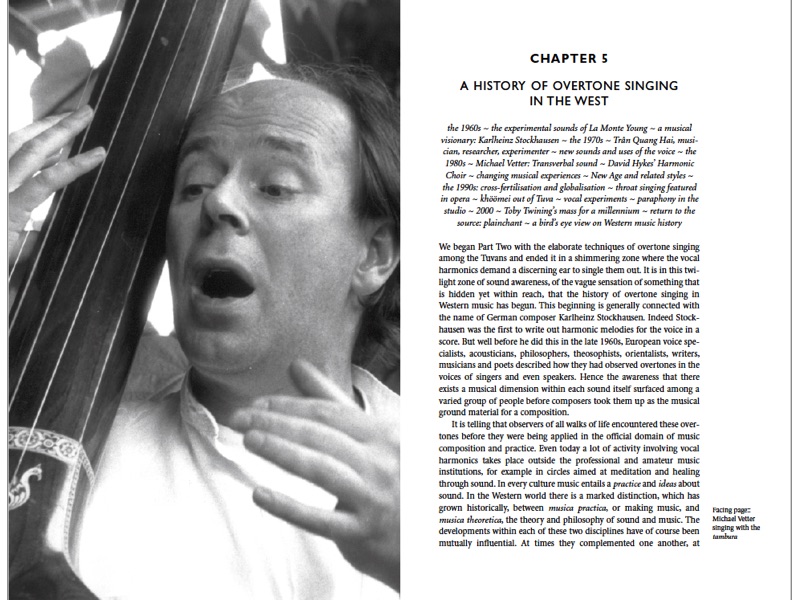 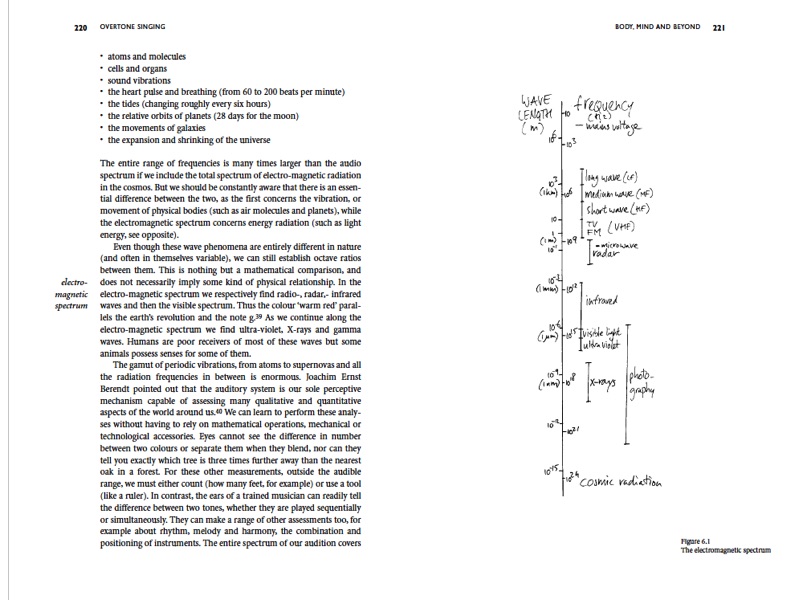 CONTENTS OF THE BOOK’S CD

The CD included in the book is not available anywhere else. It is the most complete anthology of all kinds of overtone singing styles and techniques available on a single CD. 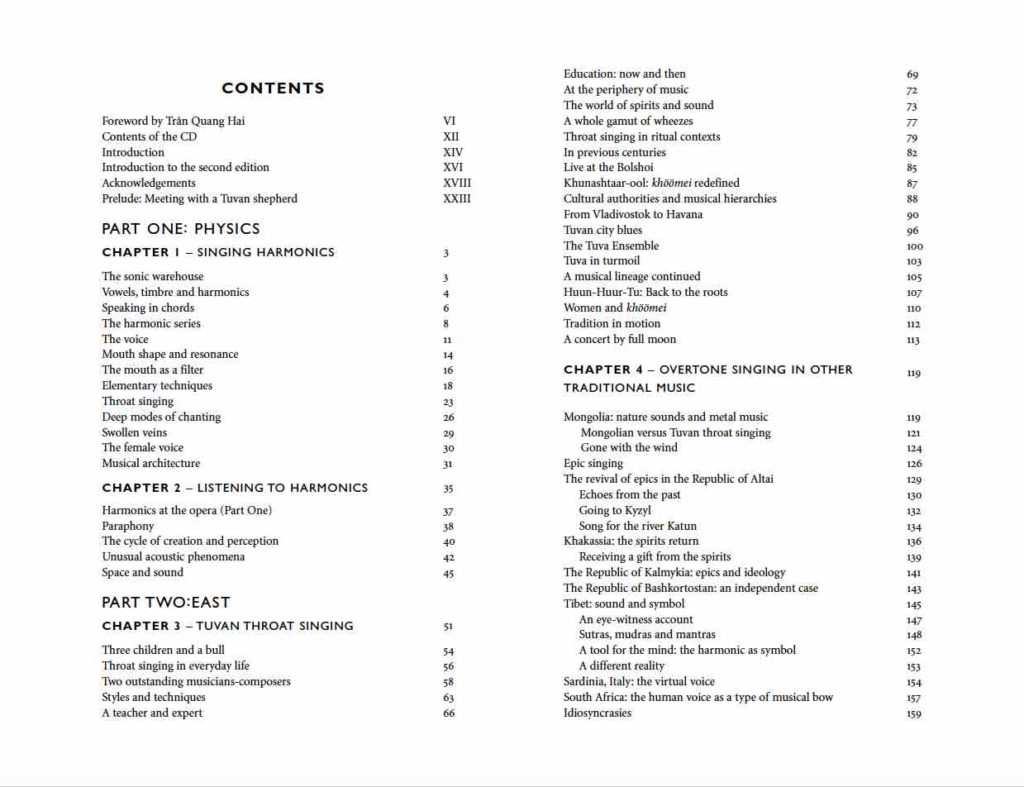 Nowadays, overtones are familiar to many people, from laymen to scientific researchers and composers. This familiarity is no doubt the result of the recent introduction in the west of a new vocal technique called overtone singing. This technique enables a singer to produce two simultaneous voices: a continuous drone and a melody of overtones above it.

A discography lists dozens of relevant CDs (including label and catalogue number) of modern and traditional overtone singing.
The CD included in the book offers the most complete survey of traditional techniques of overtone singing from various regions of the world to date. Also featured are tracks with technical demonstrations by the author and excerpts of his 2001 CD Paraphony.

THE PRESS ABOUT THE BOOK 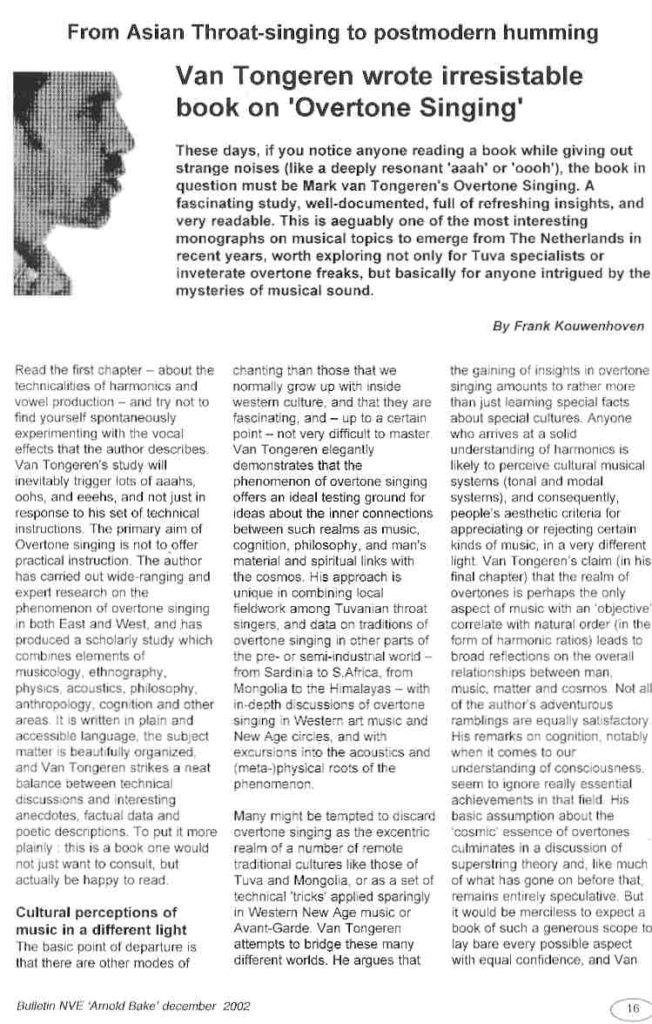 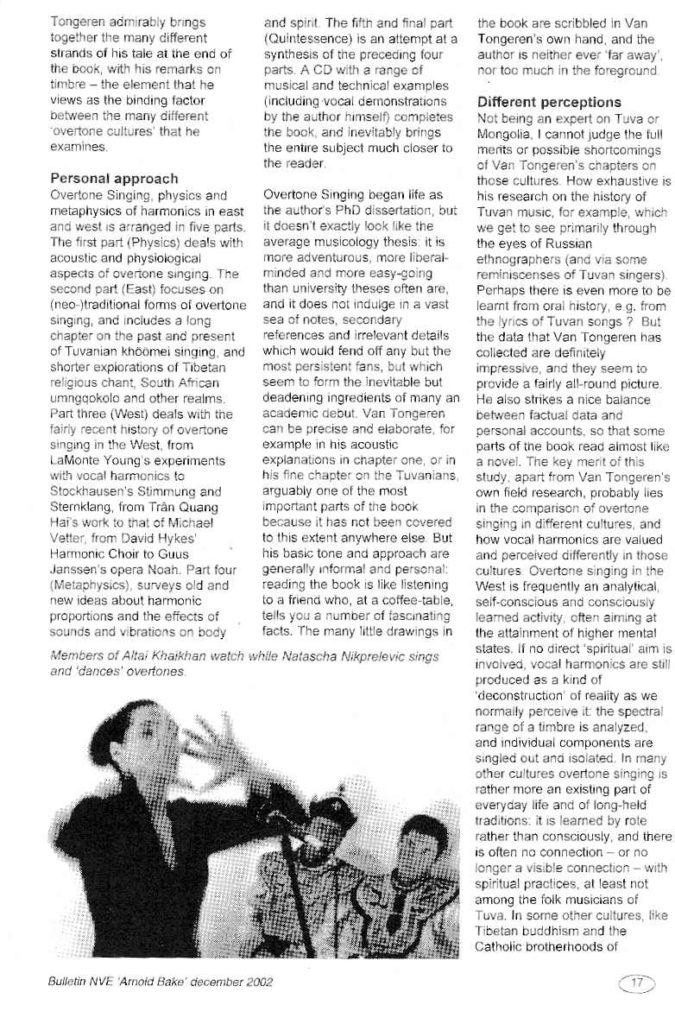 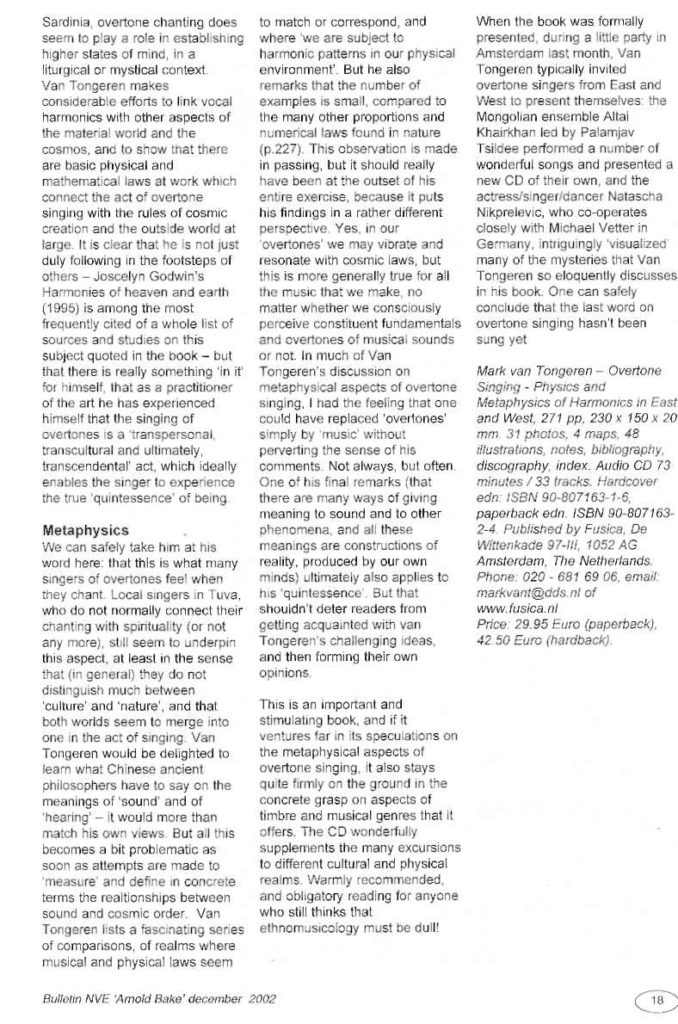 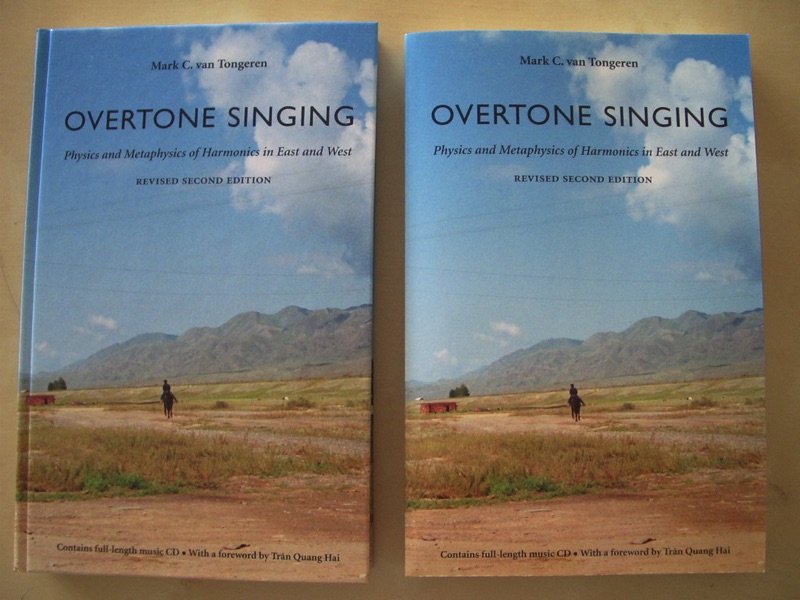