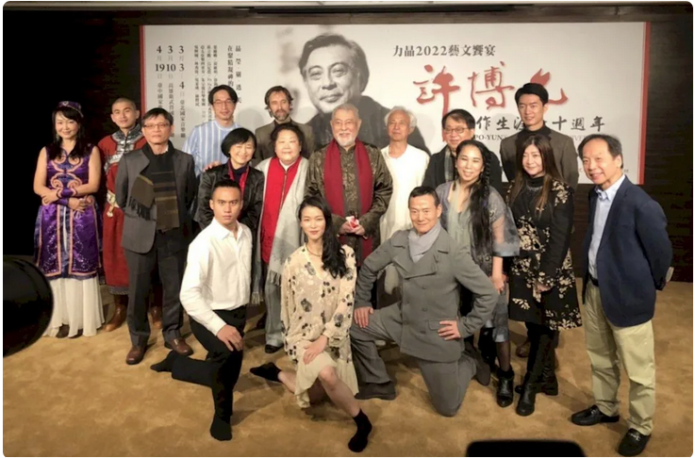 The last two weeks have been a bit of a rollercoaster for me. When we were about to launch the Taiwan Overtone Singing Association (TOSA) I received an unexpected invitation that was highly relevant to our new association. I was approached by the office of New Aspect Creatives (新象．環境), founded and led by Hsu Po-Yun (許博允). In Taiwan’s music world, and far beyond it, everybody knows this  composer-impressario. This 79-year old maestro  started a career as a self-made avant-garde composer in the late 1960s and 1970s, until he became so much  absorbed in work with his music agency New Aspects that almost no time was left for composing. Since then, New Aspects became the organisation to bring the great performers of the time to Taiwan. Big names, such as Margaret Argarich, Ravi Shankar and Placido Domingo.

The question was if I would be able to help out replacing the throat singer(s) that could not come to Taiwan, due to the pandemic? I offered the name of the only person I know of here to be able to do it, Unid, a young and talented Taiwanese student of Mongolian throat singing and the horse-head fiddle (morin-khuur), besides my own experience in various kinds of Tuvan and Mongolian throat singing. Two weeks ago I sat down with Mr. Hsu Po-Yun and his staff to discuss the realisation of an early work of his as a composer, written in 1977, called《境》, a single Chinese character that was originally translated as Mood, Field and has now been re-christened as Mood, Field, Mind, Environment. Although it does not explicitly ask for throat singing, it has been performed several times with a Mongolian long-song (urtyn duu) singer and a throat singer (khöömiich). The upcoming performances were all organised in a short time: the first concert in Taipei was less than three weeks away when we first met. Last week I attended a press conference at the National Theater. Meanwhile we have had the first (and last) two rehearsals. So I will be joining this project as a throat-singer, together with a long-song singer they found here in Taiwan, Thumentsetseg, and the young Taiwanese throat singer. The other main role in this piece is for the top percussion ensemble of Taiwan, Ju Percussion Group /朱宗慶打擊樂團 – and a mixed chorus. 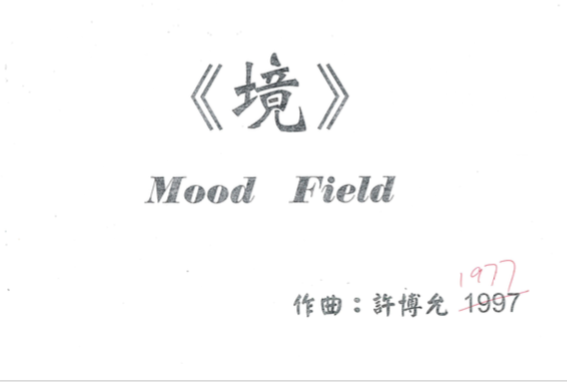 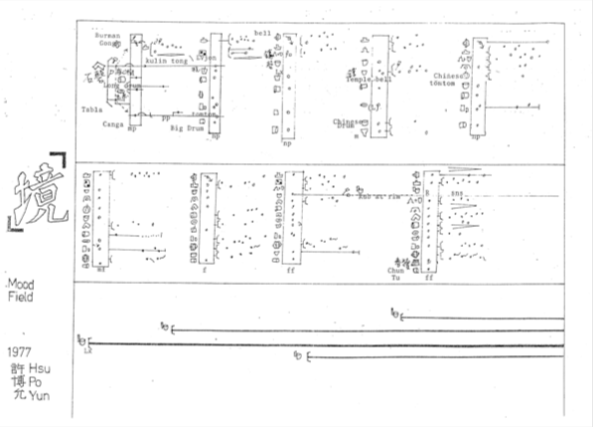 Title page and first page of the score, which had mistakenly been labeled with 1997.

The timing of this invitation hardly could be better. One of the reasons we are founding TOSA is to make overtone singing in all its varieties better known. One thing I hope to achieve is to get composers interested to write new work that includes overtone singing, throat singing (and, by extension, Jew’s harps, tambura or any other conventional or traditional instrument that make special use of timbre and overtones). And behold, our association has just come to life and a big-name composer and agency holds concerts in the three major music halls of Taiwan, namely in Taipei (north), Kaohsiung (south) and Taichung (center), featuring two throat singers.

The other synchronicity is that early this year I picked up a work on Mongolian songs by ethnomusicologist Alain Desjacques, one of the few ‘Westerners’ to make in-depth studies of Mongolian music based on fieldwork in Soviet times. That book contains a CD and the lyrics and transcriptions of 18 Mongolian songs, with some truly wonderful melodies and original voices – the kind of hardcore grassroots stuff that most trained singers performing onstage can’t beat. I thought I should dig a bit more into the two genres presented in the book, the short song or bogino duu and long song or urtyyn duu, and upgrade my improvisations around the long-songs, which I have loosely imitated and incorporated in my singing for about a decade. I wasn’t quite thinking to present myself as a singer of long songs, but working alongside an actual long song singer from Inner Mongolia and using some elements of it in this performance does help to push me a bit more in that direction. (Even more striking is another invitation nearly at the same time to collaborate on a piece by an Inner-Mongolian composer, who also explicitly asked me for throat singing and long-song – the synchronicity was almost too good to be true).

Seeing the date 1977 of Hsu Po-Yun’s piece, I immediately began to think: this may well be the earliest work of new music incorporating throat singing outside Mongolia and Siberia / Russia. The Russian improviser-composer Micha Alperin is known for such cross-over work in the late 1980s (with Tuvan throat singers). He influenced Guus Janssen who created an opera with Tuvan throat singers in the early 1990s, and at the same time several well-known collaborations of the Tuvans started happening in the US (Frank Zappa, Kronos Quartet, Ry Cooder). But this Taiwanese piece was at least a decade earlier, at a time when foreigners hardly had access to or direct knowledge of traditional overtone-throat singing. When I asked mr. Hsu about the earliest performance, it turned out the 1977 version did not include any throat singers. The piece was commissioned by the NHK or Japanese broadcasting organisation and the vocal parts were taken care of by their own in-house chorus. For the extra traditional flavor he wished for, they had arranged for singers from the Ainu, the original, indigenous inhabitants of modern-day Japan. But as Mr. Hsu also told me, he did hear Mongolian throat singing in Japan already at that time, in 1977 or earlier, while working on his project. That must have been one of the rare visits of Mongolian singers abroad, which was especially rare outside the Soviet states (inside the Soviet Union and its satellite states, there was plenty of travel and work-exchange to encourage the brotherhood-of-peoples ideal). Later on, Hsu Po-Yun managed to bring throat-singers over to Taiwan, and he visited Mongolia himself some twenty times, by his own account, including one visit with Placido Domingo.

This synchronicity of the start of TOSA, the performance of Hsu’s work in three cities of Taiwan, and the other invitation to contribute voice recordings for an electro-acoustic work) is one of those moments when you feel an angel is watching over your shoulder. Most important of all: the music of Hsu Po-Yun I got to know is indeed ‘full of charm and power,’ just as we were asked to say  in a promo-video. The main role is for the percussion group, the players are the absolute top, the scoring is very imaginative and varied, with dozens of different instruments. And the singing part, well: come and check it out, if you can. There is another interesting work of Hsu performed live next month, the opera Medea, which he presented us on CD and also sounds quite appealing to me.

What makes this series extra exciting is that I am going to perform in the fantastic new performing art centers in Taichung and Kaohsiung. The latter has opened very recently and was co-developed by the Dutch architect agency of Francine Houben. For the best views, check their Mecanoo site,  here is a family snapshot taken a few weeks ago inside the arched corridors. 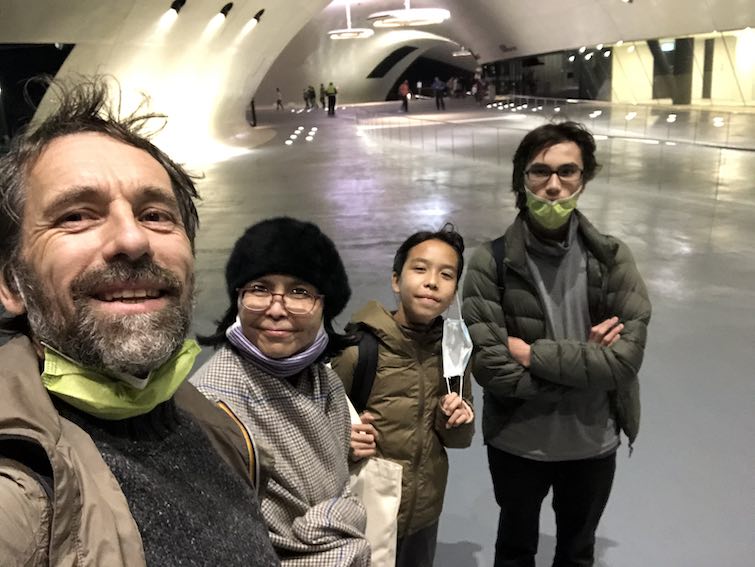 Above: Last month June invited us all to watch Bellini’s opera Norma in the new Kaohsiung Performing Arts Center; a few months earlier we saw Ricardo Canzio play in Astor Piazzolla’s opera María de Buenos Aires in another hall of this center Below: November 2016, at one of the opening performances of the Taichung National Theatre, designed by architect Toto Ito. 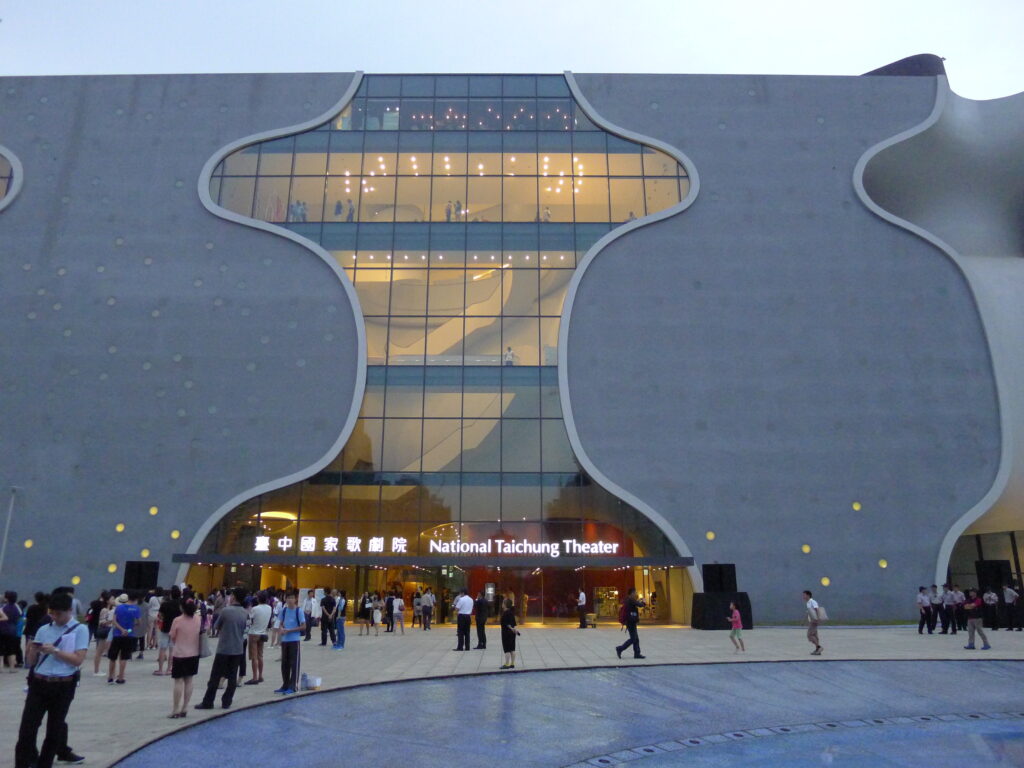 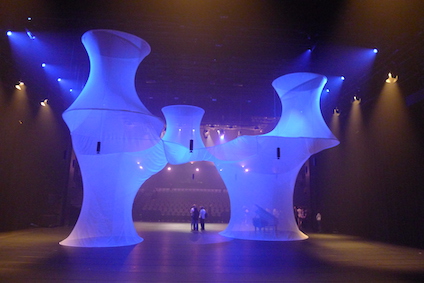 A radio interview with Chechena Kuular for Radio Taiwan International, about my involvement in this piece, is planned for next week.

Sparked from the depth of his soul, composer-philosopher Hsu Po-Yun’s music is dedicated to explore the realisation of life and mysteries of the world. While his rich experiences, firm conviction and everlasting curiosity reveals greater flair and genuineness in his compositions and philosophy, his infusion of the East and West – of Chinese Eight Sounds, Mongolian kohmei, Tibetan Brāhma, Peking opera vocal techniques, Tang Elegant Music and Japanese Noh and Western instruments and vocals – have chimed across time and space and forged a new path in music. The celebration of his 60th musical anniversary is a crossover production by Fan Man-Nong, Lin Hsiu-Wei, Wu Hsing-Kuo, Lina Yeh, Ju Zong-Ching, the most elite in the artistic field. Their interpretation of Hsu’s classics and new works is not only transcendental, but a multifaceted presentation of music, dance and theatre. 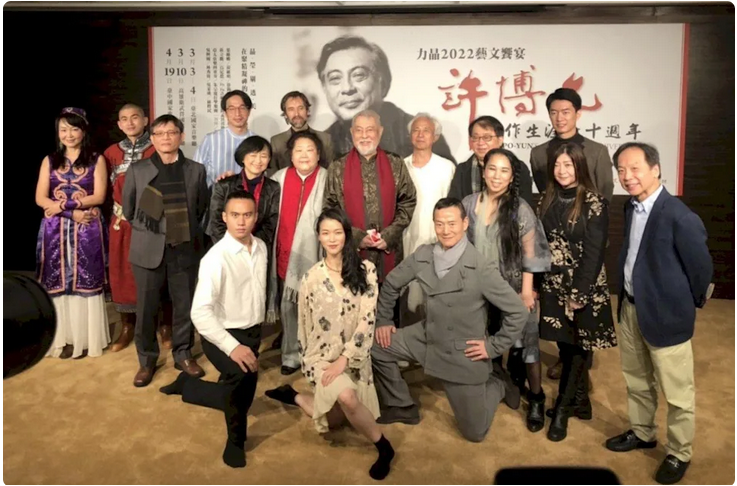 The press conference was as much an intimate celebration of Hsu Po-Yun’s 60 years in the music industry by long-time collaborators, such as Lien Hsin-Sheng from the Asian Composer’s League, Tzong-Ching Ju, founder of Ju Percussion, Wu Hsing-Kuo of Contemporary Legend Theater and many others.

The blurb from Yahoo in Manadarin: