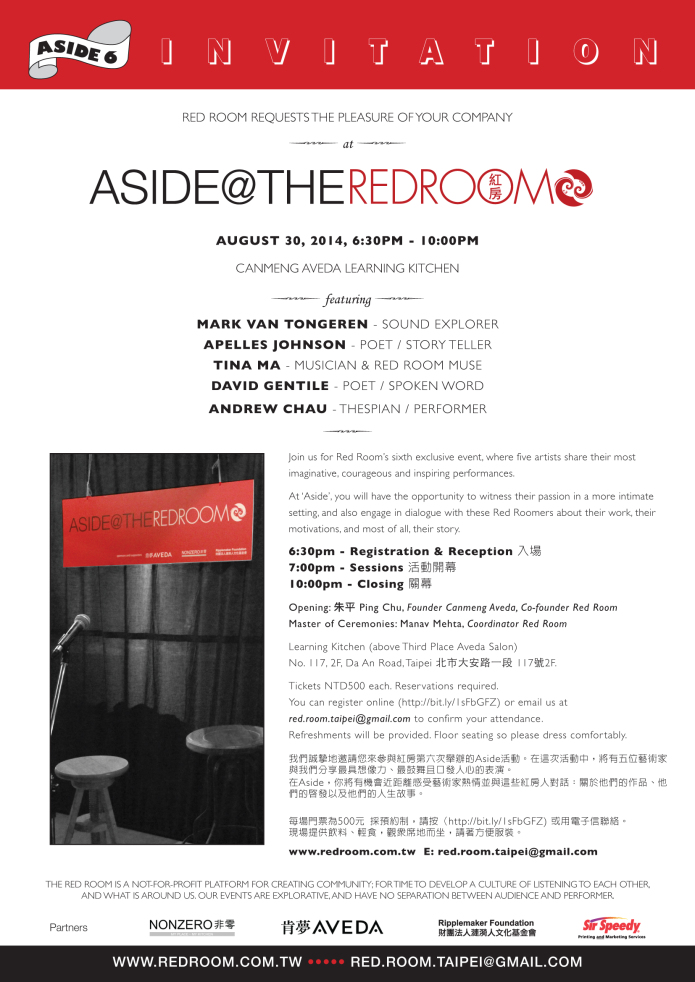 Tonight I am going to do a short ‘breath performance’ at a special edition of Red Room, the monthly event in the Aveda kitchen hosted by Chu Ping and Roma and Manav Mehta. The breath is a central focus of my performances, sometimes in the foreground, always in the background. And I thought the news of the passing away, on August 20 2014, of Bellur Krishnamachar Sundararaja (or simply ‘B.K.S.’) Iyengar would be a fitting occasion to start and end the performance using special breathing techniques.

Iyengar was instrumental in bringing yoga to the west in the 1950s and began to adapt it to the different lifestyles of American practitioners. Though he received criticism for changing the one-to-one transmission to a group practice and using physical tools such as woodblocks and straps, there can be no doubt that his methods have been a great success and have benefited hundreds of thousands of people in the West. And one can certainly not say that he himself was not fully part of the tradition, as an early video of him with is his own guru Tirumalai Krishnamacharya demonstrated. This is the full version of the 1938 film, but you can find several shorter sequences on Youtube.

It was Tirumalai Krishnamacharya who traveled India to promote hatha yoga and its associated practices and philosophies and thus began the revival which then crossed over to other parts of the world.

Tirumalai Krishnamacharya shortly before his death in 1988, aged 100

One may certainly include me in the league of teachers who misinterpret yoga or use its name for purposes other than its original intentions. But I do not agree with those criticasters who deplore what Iyengar has done. I think yoga is a fantastic practice and profound philosophy that can benefit people in many different ways. Indians should be proud to see so many people around the world doing some form of yoga or yoga-derived practices today.

I am very often in favor of traditional practices above modern forms myself, for example when it comes to indigenous music. But the modernisation and adaption process is irreversible and in the case of yoga, even those not-so-dedicated practitioners like myself learn things and solve problems that you can not learn otherwise (I struggled with lower-backache for many years; physiotherapies did not solve it but hatha yoga did).

If you are curious, read more about Iyengar in the Washington Post and on The Atlantic.