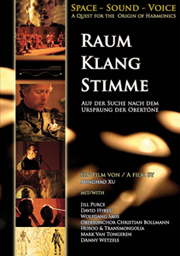 The Chinese-German (and also Dutch-speaking) filmmaker Minghao Xu made an interesting documentary about his fascination for overtones. Originally the final film to complete his studies at a Film Academy in The Netherlands, it is now enhanced and turned into a commercial DVD, published by Traumzeit Verlag in Germany.

Minghao portrays and shows the music of:

This film is a valuable addition to several existing DVDs (which I will discuss here in the future) with cutting edge visuals explaining the mechanism of overtone singing and the diverging personal interpretations of singers and teachers.

Read more about the film in German (and order it) at Ming-Art or at Traumzeit.